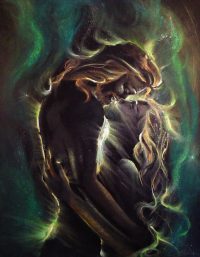 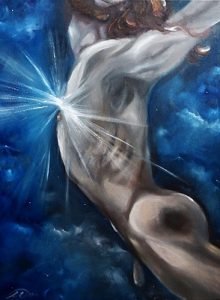 “True masculinity on any plane of existence meets the feminine with equal passion—equal passion of tenderness, equal passion of intellect, equal passion of spirit. The masculine energy, when stripped of aggression, selfish impulse, and cruelty is the spark and activation of new life, new ideas, new form. It is the clarion note of the universe, and the pure, feminine energy is the harmony. Both energies are of the same, two faces of the one and each is dependent on the other for true autonomy.  One kisses the other awake. Until both are awakened fully, each will express pain and inflict pain. True masculinity in the man—AND in the woman—are the same: protectiveness that does not control; impulse and power that does not harm; initiation that knows when to yield; and devotion without covetousness.” 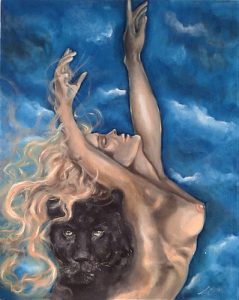 I was raised in a metaphysically-minded home. My mother taught me how to meditate when I was 4 and helped me string a strand of japa beads with a yellow tassel. She introduced me to the energies of the earth in our organic garden when I was 6 while we pressed our backs to freshly-turned soil at dusk and listened to the thrushes sing the day to sleep. When I was 8, she explained that there are three rooms inside of us called the conscious, subconscious, and superconscious minds and our goal as spiritual journeyers is to turn the light on in each of these rooms. When I was 10, she gave me copies of Walt Whitman’s Leaves of Grass and Peter Matthiessen’s The Snow Leopard. By the time I reached 16, she had led me on an inward journey of various and diverse spiritual paths from Christianity (both Orthodox and Gnostic) to Hinduism, Rosicrucianism to Sufism, Spiritualism to Soul Travel. This foundation gave me deep roots in Self-reliance and tools to navigate life’s early challenges that included my mother’s near-terminal cancer diagnosis to severe bullying in high school that eventually led to my dropping out in the 10th grade out of sheer physical, mental, and emotional burnout. But when I first picked up a book about the Sacred Feminine at age 20, it is no exaggeration to say that it saved my life.

During my early 20s, authors such as Z. Budapest, Barbara G. Walker,  Shekinah Mountainwater, and Judy Grahn were godmothers who left my weary soul words as breadcrumbs as I traveled the dark wilds of self-hatred and trauma. Self-hatred is something many women are acquainted with, and each of us meets this gorgon head-on for different reasons. For me, it was the result of intense emotional abuse by two addicted fathers, and during a time when I could not look in the mirror without envisioning putting a knife to my reflection, the path of the Sacred Feminine was what spared me from inevitable suicide. I grabbed onto it like a cosmic hand reaching into the dark well of my consciousness. In my jubilant awakening, I devoured books on women’s history and mysticism, and purchased jewelry made by “Womyn” only. I dedicated my life to the Great Mother. I also started down a one-sided path by choice–a path that excluded the masculine in both my spiritual and personal life. As an angry, wounded young woman flying out of a sometimes-violent and degrading shitstorm of parental addiction and abuse, it was damn easy to feel empowered by denouncing the male gender. For a while, it was healing and freeing, until my experience in women’s circles left me bereft and isolated. I felt like driftwood caught between two shores–and the very thing that had ignited deep transformation also gutted me on the emotional level, and I found myself back on the same wheel of self-hatred, internalizing human cruelty that has little to do with gender and everything to do with evolvement.

In my early 40s, after marrying a wonderful man who proved to me that good men do exist, all the unresolved trauma from those years with my fathers swallowed me whole. Nightly panic attacks and accompanying nausea were only the tip of the iceberg as my body let down anchor in the safe harbor of partnership with a beautiful man. He held me at 3 a.m. when I trembled violently in the pit of my stomach and waited patiently when my body shut down from terror during our intimate moments. Little by little, one toe at a time, I stepped into the sea of loving and being loved by a man–so simple for many people but terrifying for me on the cellular level until love won out over fear and anger. And I finally acknowledged how desperately I had needed the masculine all my life; how I longed for strong arms I could trust with both my body and my psyche.

I remained loyal to my Goddess path but felt drawn to studying the Sacred Masculine. I locked myself in my studio for hours and drew the Greenman, Bacchus, and Yeshua the Christ. One day–part lark, part seriousness–I decided to paint my “animus”, or inner male energy, and half an hour into the process, I knew that I was no longer in charge. 4 hours later, I stood back and looked at the finished canvas on the easel and started crying. The man who had appeared in oil paint was nothing what I had in my mind when I began, emitted an energy that was palpable, and unknowingly brought me down a path that would change my life–and world–three years later, but that is another story for another day. 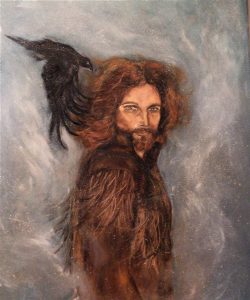 I have always been highly aware of the masculine energy inside of me. I am a “feminine” woman, but it is something I have felt very strongly at different times in my life. What I once chalked up to bisexuality is much larger, much more powerful. Each gender holds both masculine and feminine energies; Shiva and Shakti are two complex threads of the Whole and in reality, beyond gender. Both are golden nectars that sleep inside of us until balanced and activated, and when their life-giving elixirs merge as one fiery, serpentine energy up our spines, all the selves we once were and the wounds we suffered burn to ash, and a white-hot, new consciousness is born. 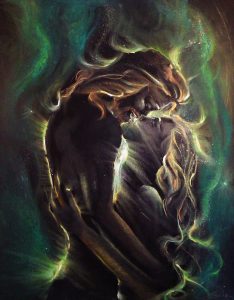 Unfortunately, because of centuries of wounded masculine energy running the show, I see many poor examples of women “embracing” their inner masculine but failing to see that they are not truly accessing the Sacred Masculine within but mirroring destructive and self-destructive patterns in displays of emotional, physical, and even intellectual aggression and competitiveness. It can manifest in the boardroom and the bedroom, and in the end, broadens the chasm between the sexes even more, accomplishing little. As women, we have the precious, innate ability to nurture fires both spiritual and creative; Shakti is the primordial force of Existence, and Shiva is powerless without her. Shakti is empowered, not overpowering; she is bedrock, not explosion. She is the vital Essence within the masculine, and the masculine is the vital essence inside her, and until we tap into the pure, distilled sacred consciousness of both, true and complete healing is not probable.

Looking back on my own life, I found healing only when I  surrendered to the Inner Marriage on the deepest level possible, and to my amazement, this exquisite Unity has little to do with gender–or the dissolution of gender as many metaphysical schools of thought tout. It also has nothing to do with sexual orientation. Along the way, I re-discovered that the universes are composed of Creative Energy, and this Force is the heart of all; it is felt in the exhilaration of the storm and the transforming, unhinging power of orgasm. Once this Sacred Union happens within, the spiritual path is no longer incomplete and we see no divisions between what we perceive to be “spiritual” “scientific”, or “sexual”. It is all One Force manifesting at varying frequencies.

If we can see everything as one energy with two poles of frequency, true vision opens. Only when I embraced the masculine outside myself and in my own depths did I fully come into my Goddess consciousness and power, and truly arrive at Self-love. A part of me wishes that I had been able to do this earlier in my life, but in my core, I know that I had to take a divergent path to find the straightway back Home. Both led me here, a place my 20-year-old self could not have envisioned, and I would not trade that for anything. 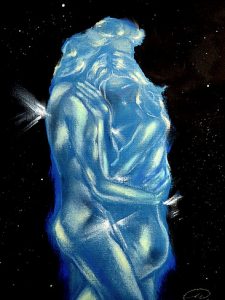 Marlaina Donato is the author of Goddess Consciousness: Women’s Mysticism & Sacred Arts, Birthing Fire: Meditations on the Sacred Feminine, and Spiritual Famine in the Age of Plenty: Baby Steps to Bliss. Visit her website and online art gallery at: www.autumnembersmusic.com 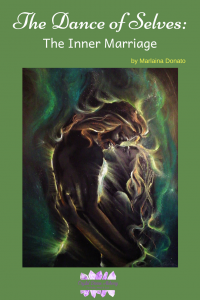